In the Spring of 1988, there was a lot of talk in the New York Sports press about a potential Subway Series in baseball that year since both New York Teams were potentially awesome …

This inspired Huntington Resident and baseball fan Brian Asher to create and develop the one and only Subway Series batting helmet.  The helmet consisted of a basic Mets or Yankees souvenir batting helmet to show your team allegiance to which was added railroad tracks, a stadium which was half Shea Stadium and half Yankee Stadium which houses a wind up toy motor.  The toy motor had a “driveshaft” sticking out of the top of the stadium to which was attached a plastic rod with a number 4 Subway car on one end and a number 7 car on the other. 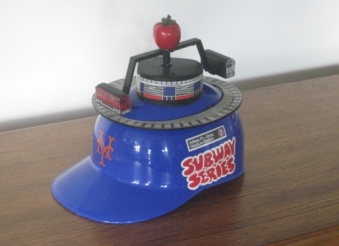 When the rod was wound up, the cars would revolve around the stadium on the track.  A little apple symbolic of the BIG APPLE was secured to the top of the stadium.  The helmet was finished off with decals of the words “Subway Series” in graffiti style writing on either side of the helmet and the names of the Shea and Yankee Stadium stops on their respective sides.  There were also decals on the stadium to show details as well as on the subway cars.

Brian’s brother Jerry, a Huntington attorney and licensed Professional Baseball Player Agent enlisted the help of two of his clients, Buddy Harrelson (Mets coach at the time) and Rafael Santana (Yankees shortstop at the time)  to make a 30 second commercial which aired on Yankees and Mets games on Cablevision in October of 1988.  After a considerable investment in plastic injection molding tools,  consulting fees, materials, advertising and office space, “THE ASHER BOYS” were in business!!!

The hats are currently a “collectors Item” !  You can e-mail for information about these hats if interested.  sasher@signaturepremier.com

Below is a photo of Buddy Harrelson, Brian Asher, and Raphael Santana………….